It is a publishing cooperative of journalists and workers established “in the belief that the collective ownership of a newspaper and its self-management on the part of those who produce it are essential to ensure the independence and autonomy of information from economic interests and political power” (see our statute, in Italian)

Our goal is “to be an original form of politics, to critically interpret the contradictions of contemporary capitalism, to give voice to the needs of those who suffer, inspired by the values of democracy, freedom and equality, which guide all our information activities and are the rules of our inner life”.

The cooperative is governed by the principle of mutuality, is a non-profit which does not distribute dividends.

The main organ of the cooperative is the general assembly, which – in accordance with the principle of “one person, one vote” – in turn elects the Board of Administration and the Editor in Chief of the newspaper.

While it still calls itself “communist” in the name, il manifesto is not connected to any political party nor organization. We are completely independent and open-minded.

Il manifesto was founded as a monthly review in 1969 by a collective of radical, left-wing and communist journalists and since 1971 it is a daily (April 28th 1971).

In short, il manifesto is a well-known, well respected, European daily of the left.

“Despite critics from political opponents on its contents, il manifesto is regarded almost unanimously as a notable example of creative and clever journalism”.Wikipedia

We are based in Rome (Italy), where we have about 45 employees. We also have regular correspondents from New York, Los Angeles, Cairo, Athens, Paris, Jerusalem, London, Madrid, Barcelona, Beijing, Mumbai, Milan, Naples, Florence, Turin and Palermo.

What makes il manifesto stand out from the crowd:

On the editorial side, our main characteristics are our covers and headlines (for the election of pope Benedict XVI, for example, we titled “The German Sheperd”, which after many years is still one of our world-wide successes) and our radical approach to politics and journalism.

In 40 years of activities, we have won several journalism prizes either for our reportages or for our covers.

On the corporate side, il manifesto is almost unique in the Western market.

The property of the newspaper is a “cooperativa”, a non-profit organization made up only of the people who work at the paper. The full time mangers are workers and journalists elected directly by the workers/members of the cooperativa.

So we are completely independent from political parties and economical entities. Due to our “communist” way of life, every employee of the paper receives the same salary, from the Editor-in-Chief to the secretaries.

Basically speaking, il manifesto is a non-profit organization, edited and completely managed by its workers.

We have a rather strong community (social networks, letters, events, forums).

This is our timeline and our statute (in Italian). 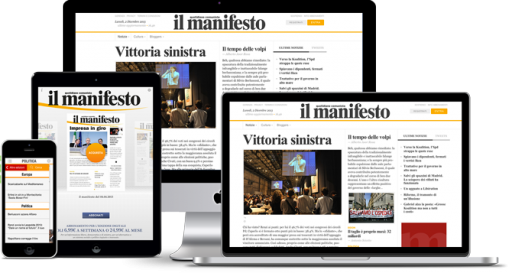